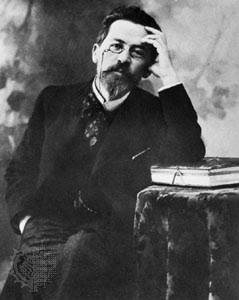 What aristocratic writers take from nature gratis, the less privileged must pay for with their youth. Try and write a story about a young man — the son of a serf, a former grocer, choirboy, schoolboy and university student, raised on respect for rank, kissing priests' hands, worshipping the ideas of others, and giving thanks for every piece of bread, receiving frequent whippings, making the rounds as a tutor without galoshes, brawling, torturing animals, enjoying dinners at the houses of rich relatives, needlessly hypocritical before God and man merely to acknowledge his own insignificance — write about how this young man squeezes the slave out of himself drop by drop and how, on waking up one fine morning, he finds that the blood coursing through his veins is no longer the blood of a slave, but that of a real human being.
— Anton Chekhov


Chekhov was indeed the son of a grocer, and his grandfather was a serf who bought freedom from bondage for himself and his sons. When his father’s struggling store went belly-up, the family moved elsewhere to start over, but young Anton, then 16, stayed behind, supporting himself through odd jobs and tutoring, in order to finish his schooling.

While Chekhov may well have resented his father’s religiosity and autocratic parenting, one sees a continuation of his father’s commitment to freedom from bondage in his attempt to “squeeze the slave out of himself drop by drop.” It’s impossible not to see Chekhov himself in his enjoinder to himself to write this story of a “young man.” Did Chekhove ever write this story? Perhaps he wrote it in different ways several times, in stories and plays, but never as straightforwardly as he plans in the quotation above. It puts me in mind of Thoreau’s lines:

My life has been the tale I would have writ,
But I could not both live and utter it.

Or maybe it is the story of his father he has in mind, a story that would rectify his father’s failed quest, which ended in religious fanaticism and the bondage of debt.

There is a terrific compendium of his work, along with biographical information, links, and a forum at on-line literature.
Posted by RH at 12:32 PM No comments: