The inaugural issue of SOLSTICE is up, and it is a treasure-trove. Work by Mike Steinberg, Tanya Whiton, Roland Merullo, Pablo Medina, Kathleen Aguero, Valerie Wilson Wesley, Kurt Brown, Dzvinia Orlowsky, Anne Marie Oomen and others, including yours truly. This is the journal to watch: eclectic and adventurous, fearless and joyful, this is a gathering of voices that marks a new beginning for online literature.
Posted by RH at 11:13 PM No comments: 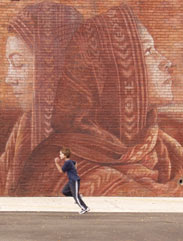 Janus Head, volume 11, Nos. 1&2 (double issue) is online. Janus Head is among the most catholic explorations of current thinking in the world. An altogether remarkable journal. And the print version is always exquisitely produced as well. I have two poems in this issue, in the company of poets whose work is almost more exciting than I can stand! (Check out Betsy Sholl's new work!) You won't be disappointed.
Posted by RH at 1:59 PM 1 comment:

PEN New England and Cambridge Forum present a discussion of the power and the pitfalls of writing in the age of Jon Stewart and Al Franken.

PEN also presents the 2009 Vasyl Stus Freedom to Write Award to Nurmuhemmet Yasin, whose satirical story "Wild Pigeon" Chinese authorities considered critical of their presence in the Xinjiang Uighur Region. After a closed trial in 2005 at which he was denied a lawyer, he was sentenced to 10 years in prison. The award is named in honor of Vasyl Stus, the leading Ukrainian poet of his generation and the last poet to die in a Soviet gulag, and is awarded to Yasin in absentia.

PEN New England is one of five regional branches of PEN America Center, which in turn is part of International PEN, the only worldwide organization of writing professionals and the world's first human rights organization. PEN's mission is to promote literacy and a culture of literature, and to defend free expression everywhere.
Posted by RH at 9:40 PM No comments: 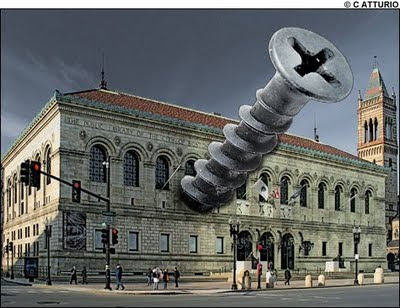 Below are my remarks at Don't Close the Books! Rally at Massachusetts Statehouse, prior to Massachusetts Book Awards November 4, 2009. The rally was to protest and attempt to reverse the decision by Governor Patrick to severely cut funding for libraries across the state. Several people asked me for a copy so I thought it easiest to post it here. For more information about this event, and to lend your support to our public libraries, visit The Massachusetts Library Association.

Good morning. I am here today as an author and a teacher of writing and literature, but mainly as Chair of PEN New England, our local chapter of PEN, an international organization founded by writers, and also the oldest human rights organization in the world. I am here because, in addition to all the many services libraries provide, they are also the guardians and exemplars of certain values, and chief among them, as it is for PEN, is intellectual freedom, freedom of expression. Censorship is anathema because it inhibits knowledge and debate, it constrains the discourse not only horizontally, among the living, but our all-important discourse with the writers and thinkers of the past. Any restriction that diminishes access to the resources libraries provide is a form of censorship, no matter the professed reason for that restriction. Even if the stated reason is a recession, or an ailing budget. Intent is irrelevant here. Restriction equals censorship.

Another related value libraries hold dear is that of privacy, the privacy to think one’s thoughts, to ask one’s questions, to seek out information and opinions. It was only a few years ago that the US Bureau of Homeland Security, with no regard for the confidentiality that is a cornerstone of intellectual freedom, sought to determine what books, articles, and internet sites had been accessed by persons they deemed “of interest.” And it was the loud and strong stand of the American Library Association that led the resistance to that infringement of civil rights. Recently one of the writers PEN has sought to defend, currently imprisoned by the Chinese government, was convicted on the basis of information provided by Yahoo, for whom global market share would seem to be a value that trumps privacy. When the chips are down, I trust my public library to safeguard my intellectual freedom before I trust Comcast, Hotmail, Gmail, or Verizon.

Because, at PEN, we are devoted to fostering the discourse that literature represents, because we believe that a multiplicity of worldviews is essential to resisting what George Orwell called “Groupthink”, we are committed to spreading literacy, which is not a simple question of being able to read or being unable to read. In our work with children, with highschool students, with prisoners, we see clearly that literacy is a process by which, once able to read and write, an individual becomes increasingly able to interact with complex texts and, thereby, to acquire knowledge and understanding and the ability to take part in the larger conversation from which they would otherwise remain excluded. Libraries are the centers of that literacy effort. No literate person setting foot in a library is not returned to a state of intellectual curiosity, a state both humbling and exciting: look — and in a library you can SEE it as you cannot see digitized texts arrayed in cyberspace — look at all there is to learn and understand, riches greater than one life can gather and spend. This understanding, so clearly apprehended in this sacred space, is our greatest safeguard against the intellectual intolerance that history tells us precedes a society’s descent into violence and totalitarianism.

Libraries represent our commitment to learning, and in their democratic access to a treasury of intellectual and cultural capital, they are our real common-wealth, not merely a symbol of it, but the embodiment of that ideal and its daily continuance. Public libraries level the playing field. Our public libraries make available the conversations of the past — the enthusiasms, arguments, warnings, discoveries — to people who would otherwise have no context for understanding the issues of our day. Without our libraries an ahistorical view of the world prevails in which our troubles have never been faced by human beings before, in which we are isolated from one another’s concerns, and in which the civic matters that affect us are decided by the loudest voices and catchiest slogans.

It’s a truism that libraries are institutions charged with preserving and transmitting the records of humankind on behalf of future generations, but it’s important to understand that that rhetorical term “future generations” really means our kids. When we close libraries, or cut their hours, or their staffs, or their budgets, we are really ripping off our kids. I can’t imagine my boyhood without the refuge, the promise, the renewal that was mine at the library. Nothing in my boyhood, not athletics, not school subjects, not my religious upbringing was so empowering. I understood very early, with the help of a friendly librarian — have I mentioned that librarians are also educators? — that there was no question I had about the world or anything in it that I could not set about answering with the help of those alphabetized drawers full of cards. It had been ordered and cross-referenced in such a way that even the act of tracking down the information was rewarding. I think that I also learned that my education, my entertainment, and my direction were my own to seek; they were not something that anyone could either give me or withhold.

Sometimes magical but always sacred places, places of refuge and contemplation, of inspiration, of learning, libraries are, especially now, important troves of information. Research shows clearly that in times of recession, people need their libraries more than ever, for career research, educational opportunities, legal and financial information, job-hunting, and even, for some, a safe warm place on a winter’s day. This is no time to weaken our commitment to institutions at the heart of peoples’ aspirations. The public library is the very center of democracy. In a difficult time, our libraries are more essential than ever. Funding them adequately is both a practical and a moral necessity.