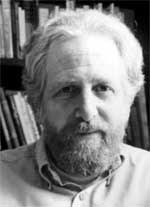 Today I just want to bring attention to the work of Baron Wormser, one of our finest poets.

I was talking to an otherwise literate friend the other day, and I mentioned Wormser’s work to him. Who? he said, which is evidence of a wrong worth righting. Wormser has been a “poet’s poet” for a long time, a remarkable and brave example of how to live the poet’s calling with integrity, intelligence, anger, tenderness, wholeness. Here is a site devoted to his work:

And this essay is a chapter of Wormser’s memoir The Road Washes Out in Spring:

You can read several of Wormser’s “Carthage” poems here, along with the stunning and acerbic poem “The Torture Channel”:

And another “Carthage” poem can be read here, at The Manhatttan Review site:

http://www.themanhattanreview.com/archive/11-2_carthage.html
Posted by RH at 9:36 AM 2 comments:

He took their sage,
not their advice;
it smoldered like rage
but smelled nice.

One of the Santa Maria's crew, avaricious and schooled in flattery, suggested to Columbus that he try calling them "the middle class." They seemed to like that just fine. They smiled. Why not? Sure. Sounds good.

Columbus ordered them given naugahyde and vinyl. Then he watched to see what they would make of it. It stuck to sweaty skin in summer and in winter it was cold as metal. It cracked, and several cut their buttocks on it.

Eventually they came around, though, when the buffalo were shot to hell, the beaver damned, and the deer and the antelope played out.

Like the real Indians, the real middle class was a world away.

Soon after his return, Columbus was imprisoned for his errors. The King and Queen concurred that these new subjects must forget their names, and never know their purpose to the empire. Thus, an edict went forth that there were no classes in the New World because

in the New World, everyone is Middle Class. Everyone.
Posted by RH at 10:01 PM 1 comment:

From time to time I may post something I've written that seems not a part of anything else, not a poem or story I want to otherwise publish. This is one of those things, a parable.


HOW THE DEVIL GOT HIS HORNS

A jackass, his long ears lying back flat and his big teeth clacking with every word, was preaching a sermon to the assembled creatures. His post as preacher had been acquired by virtue of his loyalty to his master, whose cart he drew wherever he was told; in fact, his loyalty, much remarked upon, was really an abiding hunger for carrots, bunches of which were his for merely going where he was directed and pulling this or that load no questions asked. He cleared his throat: Ggrhawwwwwwww!

A pig in the first row farted, loudly.

“Pew!” said the hyena behind him, shrieking with laughter. “Get it? Pew!” and he cracked himself up again, along with all the young nearby whose parents shushed them with stern looks.

“Today,” said the jackass, “it is my sad duty to chastise you, my congregation, for your lasciviousness, your licentiousness, your concupiscence, and.. and.. and your scriptural, that is to say doctrinal, theological rebelliousness made manifest, shall we say, in the near catastrophic rise in the numbers of you who seem to believe that simply because Spring has arrived you are free to frolic and to gambol, that is to say, to… to fornicate with abandon and at every opportunity!”

Not so the goat. He curled his lip and snorted, He stepped into the center aisle of the chapel and stomped the hard polished floor with a fore-hoof. The jackass went on preaching. “Think on these things my brethren. Examine your conscience.”

The pig let out a long, almost musical belch, echoed soon after by the mockingbird in the choir loft. The goat brought up some cud and chewed it, mulling the preacher’s words.

“Ought there not to be in this world a race of creatures disciplined to restrain themselves, to submit to law and reason those bestial appetites that drive the merely pleasure-seeking weaklings among us? You know who you are, my brethren, stunted in your spiritual growth — fornicators, lotus-eaters, profligates!”

The goat gulped back his cud and stomped the floor again. “You carrot chomping, bucktoothed hypocrite!” he said. “You cannot, so you preach that we shall not. Your father was a horse, your mother a mule, and you are worse than a gelding, you bio-engineered hack! You cannot mate! You cannot reproduce! He begrudges us, dear friends, what he cannot have. I’ll have no more of this garbage!” And with that, the goat clomped down the aisle and out the doors of the chapel.

This was news to the congregation and set them to mumbling and fumbling from the pews, filing out of the place and looking for places among the shrubs and tall grasses where they might take their private pleasures guiltlessly.

The jackass, from his pulpit, brayed and brayed to the empty pews.

Now when the jackass’s master heard the story of that sabbath morning, he did what all masters do — he thought about how to turn the situation to his own advantage. First he set about buying all the available carrots, lettuce, radishes, and what stores of nuts and apples had been laid by. Then he bought whatever property, especially tillable land, that he didn’t own already.

Soon everyone was mighty hungry. Those few heads of lettuce that anyone might grow, those few hidden nuts wrapped in a rag in a drawer, became as precious as gold and nearly as expensive to buy. And of course with all that procreation going on, soon there were many more mouths to feed. The situation became desperate. Luckily, the jackass’s master had been watching closely for the moment when his philanthropic impulses might be exercised to the greatest good and to his greatest advantage. The word went forward across the land that, thanks to the master’s largesse, plenty of lettuce, radishes, seeds, apples, nuts, fruits, and hay were to be distributed after the services at the chapel each week, right after the sermon, and that all — pigs, cows, horses, sheep, all manner of birds, squirrels, and rabbits — were welcome. Everyone but the goat.

Little by little those who meant never to set foot in the chapel ever again came back, bringing their hungry offspring. Soon, as the master had predicted, there was a whole new generation of devout creatures who listened, intent on not repeating the lecherous mistakes of their parents which, as they were told repeatedly, had brought about great misfortune.

Even the goat returned. Not in the flesh, however. No, he was represented everywhere, in story and painting, in song, in stained glass windows and pictures in prayerbooks: he became the tempter, the angel of darkness, the evil one. Even today you can see these representations of the archfiend with his goat’s beard, cloven hooves, and horns.

As for the jackass, he is braying from the pulpit still. If you don’t believe me, go and hear for yourself!
Posted by RH at 3:22 PM No comments:

I have been thinking about the word PREMISES today. It's part of my attempt to teach myself how to think. (I do not think that much of what passes for thinking is thinking, really.) I have been fascinated by the word as it denotes both a locale, a place upon which something is built, and a foundation for an argument or structure of thought. It is easy to build an internally rational and consistent argument upon false premises, and the more built-up or articulated an argument is, the harder it is to discern the foundation of it, the premise upon which it has been raised. The whole edifice is so jerry-built, such a complex of ramifying and ramshackle ideas that it becomes hard to discern which of its walls are load-bearing and which are mere partitions. It seems to me that whether you serve or oppose a system of thought, you need to know that: which parts are structural, which walls are load bearing, either in order to keep them in good repair or to know with certainty where to place the charge.

In another era the artists were creators; in this one we are involved in a massive deconstruction project in order to clear some space and let the light in. I'm reminded of a section from the Hungarian poet Attila Joszef's poem, "Consciousness"

Just like a pile of split wood,
the world lies in a heap.
Each thing is pushed and squeezed
and held in place by every other,
thus everything is determined.
Only what is not can still become,
only what will be can flower.
Everything that exists is already dying.

But maybe I am reminded of it not because the verse advances my thinking, but because it humbles it, checks it, asks me to consider how much of what I think of as structure is just accident: "just like a pile of split wood."
Posted by RH at 4:37 PM No comments: