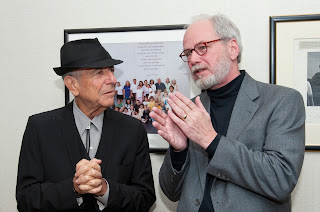 If I remember correctly, we were talking about his friend and mentor, the poet Irving Layton, whose work I encountered as a young man at a time when I really needed it. His poems of grief and anger showed me a way forward in a dark time. And of course Cohen's poems, which represented an alternative to the canonical modernists on the one hand and the Beats on the other, whom I found overbearing and loud. We talked a good while about poets and poetry and later about being grandfathers.

This photo was taken by Rick Friedman and belongs to the John F. Kennedy Library Foundation.

I've recently reread Cohen's The Book of Mercy to see if it would still move me as it once did. It does.

(Layton's work, admittedly older, often feels dated to me, as if arising from a cultural context, especially with regard to masculinity, that has passed.)

Look at Cohen's hands in the photo: time and again, in The Book of Mercy, head and heart come together in just that way. I close that book not with an urge to paraphrase or otherwise talk about it, but with gratitude.
Posted by RH at 2:10 PM No comments:

Today's wood s lot has a good deal more depth in its treatment of Robert Bringhurst. Thank you to Mark Woods.
Posted by RH at 9:00 PM No comments: 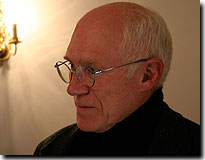 I want to dedicate this post to the work of the Canadian poet, Robert Bringhurst. It is either the perfect example of our xenophobic poetic culture in the US, or else my own narrow-gauge attention to what is — in this case so gloriously — being written elsewhere in North America that I had not heard of him until recently. Now I am reading his Selected Poems from Copper Canyon, and I am completely in thrall to this body of work: serious and playful, political and spiritual, formal, lyrical, learned, and sublime. Here is his “These Poems, She Said”

According to Kate Kelloway, writing in The Observer, Bringhurst “has the curiosity of a scientist. He never overindulges in emotion. His writing is at once lyrical and spartan. And yet he is witty. And while he has no taste for lamentation, many a poem catches, calmly, at the heart.”

You can find him reading on YouTube here and here.

Bringhurst is, as it happens, also the foremost typographer of our age, and his Elements of Typographic Design is considered mandatory reading for book and, now, web designers.
Posted by RH at 9:33 PM No comments: