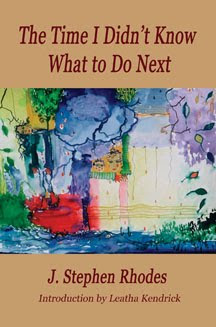 THE TIME I DIDN’T KNOW WHAT TO DO NEXT

The time to which the title refers is the day of the poet’s daughter’s suicide, or the day after it, or the day after that, etc. Nothing can be said about the experience of living in the aftermath of suicide that hasn’t been said more simply and memorably in the book’s first poem, “Morning Worship,” which begins:

I woke up dead this morning

and ends with its stoic affirmation of life as an interaction, an invitation. Here is the final stanza:

Listen. Every day I wake up

dead all over again

at a loss for prayers.

Then the world says:

If Keats was right, if the poetry of earth is never dead, then this poet, a minister, a writer steeped in a deep understanding of creation’s injunction to participate, must find his way to the will to reengage. That word listen is the key; he must listen to what the world seems to him to be saying and must try, broken-hearted, to say what is still deserving of praise, what is, what goes on. And because that word listen is also a gentle imperative to readers, he must find a voice to express his grief and confusion and shaken but unbroken faith.

Rhodes looks to the past, to his forbears, “the watchful/who take the dog of their sadness for daily walks” (“Things Passing”) and to his memories: “your little girl self leaning out from behind the black oak” (This New Never”). He prays to “God of the indefinite/ walk between February/ and March” (“First Flower”) and he manages, somehow, to stay in relation to his beloved daughter. As this powerful and musically careful (as in full of cares) voice becomes more surely his own, it begins to sing of the erotic, the comic, the playful, the joyful. And as he considers love and loss and even who the God of all this “bizarre country of crosses, stones” might be, he wakes to the demand “to embrace the stranger inside I am called to become” (“Stranger”).

A book, not a miscellany, THE TIME I DIDN’T KNOW WHAT TO DO NEXT coheres; in fact, its orchestration reflects the difficult reintegration of self in the aftermath of the unthinkable, the seemingly unbearable. These are well-made poems, insistently inventive, various, memorable, and above all musical: Listen.