I am incensed by a news article in the Boston Globe today, “Pope to deliver apology to Ireland.” I have seldom seen such a cynical acceptance of the public relations dictum “perception is all.” The article seems to agree that the problem is the Catholic Church’s “image,” and not the worldwide criminal conspiracy recently brought to light by brave survivor-activists who compared notes, documented the paths of destruction left by pedophile priests, and refused to be silenced. It has seemed to me of late that The Boston Globe has been trying hard, since the fine work of its Spotlight Team exposing the abuse of kids in the Boston Archdiocese, to kiss and make up with the church. Lots of pictures of Cardinal O'Malley, lots of space allowed him to weigh in on moral and political matters, lots of pictures of him with the homeless, or recently, walking around Haiti in his sandals and humble brown robe. An article about the church's PR problem is not just kissing and making up, it is, well, ass-kissing. It makes the church the victim. It pretends to tell us about good men trying to recover from what some bad men did; never mind that they are the same men. The reporter, Shawn Pogatchnik, fills column-inches with a story. He includes a few quotes. And he steadfastly refuses to tackle the real subject.

A simple gathering of the figures from Ireland, Australia, New Zealand, Canada, and the United States puts the number of children violated at, easily, a million. Add in the numbers coming from other European nations, South America, and Africa, and we approach something like the real scope of this institutional depravity. If we further bear in mind that these numbers reflect only the latest generation of clandestine exploitation and not the earlier decades and perhaps centuries of it, then we begin to see the depth of it as well.

All the pope’s robes and regalia cannot hide his own history. His directive to bishops worldwide as Head of The Congregation for the Doctrine of the Faith (a bureau that was once called The Congregation for the Propagation of the Faith, a.k.a. The Inquisition) insisted that the abuse of minors be regarded as a matter of church business first and last. The oldest hierarchical, quasi-military chain of command on the planet reinforced its claim as a totalitarian Ministry of Information in that document, reminding the bishops that their first allegiance was to Rome. It is that reinforced chain-of-command which must soon tighten round this pope’s neck as it is shown over and over, in court after court, in country after country, that his bishops obeyed his orders to keep silent, evade the questions of civil authorities, and protect predators.

One has to wonder if these priests didn’t sign on to be priests in the first place precisely for the guarantee of that protection. In any case, it is clear from the forceful insistence on obedience and silence of Cardinal Ratzinger’s edict that he was aware of the scope and depth of priestly criminality and its longstanding cover-up. He must also have understood the devastating consequences of full exposure. The Catholic Church is shaken, rightly, to its foundations as a professed force for good in the world by the increasing evidence that it has been among the world’s major forces of the ongoing persecution of innocents. Cardinal Ratzinger knew, and knows now as pontiff, that this is not a PR problem.

In the story, it’s always the child who points out that the emperor has no clothes. But it takes an adult to point out that in addition to being naked, he’s also ugly — deeply, morally, spiritually ugly.
Posted by RH at 9:18 PM 1 comment: 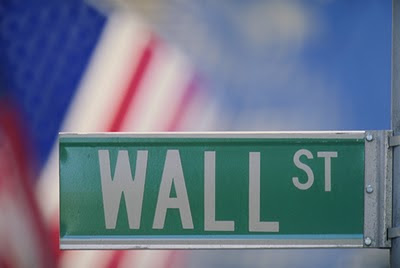 This fine essay is reposted from wood s lot. I believe it gets to the root of our condition, i.e. it’s a truly radical analysis of not only our economic, but also our social and spiritual devastation.

…Pick up the New York Times today, and you’re likely to read yet another article about finance’s infidelity with the general public, another violation of the (invisible) norms of propriety. It is only with immense discipline, a well-stocked inventory of financial jargon and a readiness for self-deception that one can actually distinguish these “violations” from business-as-usual. Yet despite ubiquitous references to Wall Street offenses, maybe even because of them, Americans don’t seem deeply troubled, or even all that perplexed, that this abusive sector remains largely undisturbed. Most of us can dutifully recite the scandals and statistics, but few dare to imagine life without Wall Street. For all the talk of a rapidly evolving economic environment, we treat one feature of this environment as permanent: the existence of a class of individuals who make millions by making nothing. We’re no longer surprised to see business elites divine exorbitant bonuses, paid for through record unemployment levels and unprecedented government support. This trick is getting old.

Though Wall Street consistently updates its instruments and practices, one governing rule has remained since Veblen’s time: financial propriety has nothing to do with social and economic growth. Certain rules must be followed, but the construction of those rules is absolutely distinct from considerations of general social welfare. Rather, regulations and rules are defined according to the culture’s metric of success, of value, of esteem—and that metric is money. All financial practices that increase the wealth of the sector are not merely permitted, they are required. No profitable innovation can be ignored. Destabilizing the global economy is fine. Undermining one’s firm, or jeopardizing the system of trading and speculating, is not.

Finance today is not geared toward getting entrepreneurs the credit they need to actualize their good ideas. It is riddled with archaic social forms that perpetuate barbaric status anxieties. The appeal of the Wall Street lifestyle—money, clean working conditions, (paradoxical) status as stewards of prosperity—has blighted the rest of society with its message that the best kind of work is devoid of social utility, knowledge and permanence. Nonetheless, we continue, even in the wake of economic crisis, to accept the barbarians’ rules for social and economic life. The discussion in government today revolves around minor matters of transparency and enforcement. The barbarian does not abide by rules; indeed, it is a point of pride that he knows his way around them. No matter what regulations are passed, the barbarian will figure out a way to make money from them...

READ THE FULL ARTICLE HERE, at POINT Magazine
Posted by RH at 7:23 PM No comments: