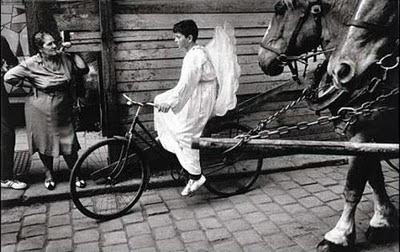 PROCESSION: AFTER A PHOTOGRAPH BY JOSEF KOUDELKA

It only looks as if the boy
on the bike, in his angel costume,
is pulling the heavy load,
drayhorses and all, that we cannot see.
Like the faces of the domestic beasts,
his face says he is only halfway present.
He has learned to steer with one hand.

And it only looks as if the stolid crone
is watching him for one false move.
In fact, she is looking beyond him,
maybe at some likeness of a saint
the yoked team pulls impassively.
Strapped to his shoulders, his wings
have survived remarkably intact.


(This Koudelka photo was featured on today's wood s lot. I was reminded that I'd written a poem, unpublished, in response to it a few years ago. I found it sleeping in a corner of my hard drive.)
Posted by RH at 10:10 AM 1 comment: