I won't be able to post tomorrow, so here is Issa's haiku for the turn of the year. HAPPY NEW YEAR!

New Year’s Day—
everything is in blossom!
I feel about average. 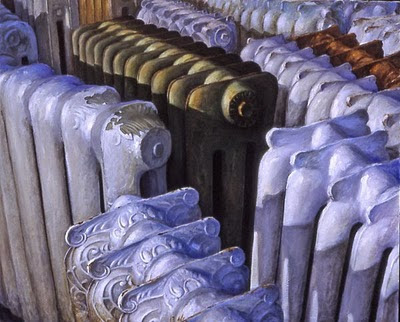 I first became aware of painter David Sholl's work on the cover of his sister Betsy Sholl's poetry collection, The Red Line. Recently I had the chance to see his works in his studio at Brickbottom Artists. As in the painting above, Sholl is a master of texture and light, freshening our vision as the best painters are able to do. Some of the paintings that most impressed me are of dogs, including his beloved lab, Farina: they're simply the doggiest dogs ever painted: captured in motion with their quizzical looks, their playful and intent mien, their canine intelligence.

You'll also find a few more radiators there. Enjoy!
Posted by RH at 11:04 AM No comments:

A BB gun.
A model plane.
A basketball.
A ’lectric train.
A bicycle.
A cowboy hat.
A comic book.
A baseball bat.
A deck of cards.
A science kit.
A racing car.
A catcher’s mitt.
So that’s my list
of everything
that Santa Claus
forgot to bring. 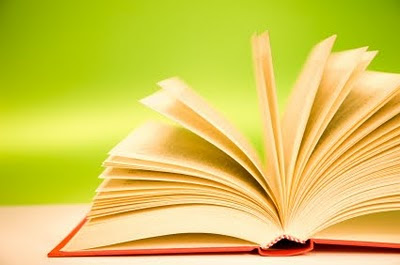 There is a half hour interview with yours truly, speaking with Elizabeth Lund HERE. She has interviewed a number of fine poets on this site, including Meg Kearney, Fred Marchant, and Kathleen Aguero. ENJOY!
Posted by RH at 10:54 AM No comments:

I came across this poem (though I don't recall where or when) and just wanted to post it here. Ann Hutt Browning's book of poems, Deep Landscape Turning, was published in August, 2009, by the Ibbetson Street Press.

When she awoke in the morning

She threw back her all cotton sheet,

Cotton woven in a far off country

By a dark skinned girl chained to her large loom.

When she went into her kitchen

She ground beans to brew her coffee,

Beans grown, roasted in a far off country

Where the tall trees were cleared off the land

For the coffee bushes to be planted

And tended by boys not in school and men

Old before their time and where all the waste

From treating the beans is flushed and dumped

In the river, adding that detritus

To the human waste and chemical run

Off already there in the gray water

And where downstream others used the water,

That dark water, for cooking and bathing.

After her children boarded the school bus,

Wearing clothing made in the Philippines,

Of imports from other worlds, far off countries,

Blueberries from Maine, all bought because

In her garden she grew hybrid tea roses,

Held down by pine bark, chipped in Oregon.

Then she roamed the market aisle marked

"Special," and bought a basket, its colors

Imitative of Mexican folk art, made in China,

Dyed the fronds of grass, wove the basket

And attached the label.

She ate a quick lunch of a hamburger,

The ground beef from a far off country

Where the virgin forest was burned off

So cattle could graze on tropical grass,

The bun made from Canadian wheat

And the ketchup, again those Mexican tomatoes.

She drove home to prop up her feet

On the foam cushioned sofa, turn on the TV,

In a maquiladora by a woman

Who rose at five a.m. to walk three kilometers

To the bus, who then rode twenty-five miles

To the factory in the tax free zone,

Who worked from eight to five

With a quarter of an hour to eat

Or use the toilet,

Who got home at eight o'clock

To bathe and feed her three children,

With eighteen cents an hour in her pocket

The woman on the sofa

As usual on a week day,

She lived an ordinary life

WATCH THE VIDEO of the 2008 PEN New England panel, preceded by Eric Grunwald presenting the 2008 Vasyl Stus Freedom-to-Write Award to Abdul Rahim Muslim Dost, an Afghani poet and sometime journalist who was detained for three years at Guantanamo, released, then rearrested in Peshawar for a satirical poem he'd written. His whereabouts remain unknown.

The main question we wished to explore here was why so much American literary writing seems tame and well-behaved, so unthreatening to the powers that be. While there can be no single or simple answer to that question, each of our panelists had trenchant things to say, and there is a great deal to think about here. Enjoy.

Risky Writing and the Forces That Silence It
April 10, 2008

Richard Hoffman moderates a panel discussion about the forces in the world of publishing, society at large, and our own psyches that work to silence "risky writing".

The importance of politically challenging fiction and poetry throughout history is undeniable: from Turgenev's powerful A Sportsman's Notebook, which prompted Czar Alexander II to free his country's slaves, to Ginsberg's Howl to Doris Lessing's fiction to James Baldwin's powerful and incisive essays.

Has such writing been effectively denied its audience in our day? To what extent are the barriers to risky or oppositional writing real or imagined? What are the long-term societal and cultural dangers of a safe literature, of books as mere entertainment or escape? And what are the individual author and the reader hungry for substance, to do?

PEN New England's Freedom-to-Write (FTW) Committee, in partnership with the Cambridge Forum, hosts a panel discussion about the forces in the world of publishing, society at large, and our own psyches that work to silence "risky writing," the most dangerous but often most important of an author's works. The panel, moderated by Richard Hoffman, poet, fiction writer, and author of the memoir Half the House, features Carole Horne, General Manager, Harvard Book Store; Linda McCarriston, author of Eva-Mary and other books and professor of creative writing and literary arts at the University of Alaska, Anchorage; Mark Pawlak, poet, author of Special Handling and other books, and editor of Hanging Loose Press; and Jill Petty, editor and small press publisher.
Posted by RH at 9:14 PM No comments: