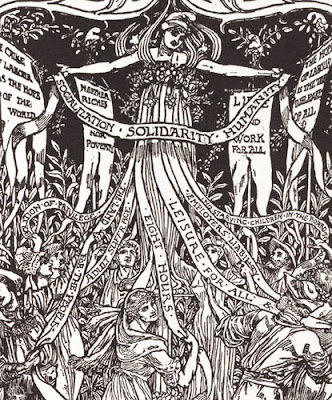 
Reprinted from an essay by Neal Towart, found at


May Day as a modern working class celebration and commemoration began from the 1886 events in Chicago where workers were demonstrating for an eight hour day. But the day already had special significance for working people before then.


PreIndustrial May Day and Working People

As a working peoples celebration its origins go back much further, with connections to Ancient Roman rituals. In pagan Europe it was a festive holy day celebrating the first spring planting. The ancient Celts and Saxons celebrated May 1st as Beltane or the day of fire. Bel was the Celtic god of the sun.

In the 1700s the Churches banned the pagan rituals, just as bosses today want workers to forget any traditions of solidarity and celebration of workers rights, but many peasants continued the tradition. Church and state were the butt of many jokes at May Day celebrations, and this certainly did not endear the craft guilds and others, who organised celebrations, to the authorities.

The Goddess of the Hunt, Diana, and the God Herne led parades. Later, with a move to a more agrarian society, Diana became a fertility goddess, and Herne became Robin Goodfellow, a predecessor to Robin Hood. This also indicated a shift in the division of labour and perhaps to a shift in power relations, with Robin remaining a symbol of the hunter from the woods, while Diana changed from being a hunter to a symbol of the fertility of the fields.

May Day was popular through to the nineteenth century, with the form of the celebration changing. The two most popular feast days for Medieval craft guilds were the Feast of St. John, or the Summer Solstice and Mayday.

The Diana myth was transformed into the Queen of May, who was elected from the eligible young women of the village to rule the crops until harvest. Besides the selection of the May Queen was the raising of the phallic Maypole, around which the young single men and women of the village would dance holding on to the ribbons until they became entwined, with their ( hoped for) new love.

Robin Goodfellow, or the Green Man who was the Lord of Misrule for this day. Mayday was a celebration of the common people, and Robin would be the King/Priest/Fool for a day. Priests and Lords were the butt of many jokes, and the Green Man and his supporters; mummers would make jokes and poke fun of the local authorities.

Our modern celebration of Mayday as a working class holiday developed from the US workers struggle for the eight hour day in 1886. The working class movement in the USA began campaigning for an eight hour day in the 1860s, following the Civil War. The historic strike of May 1st, 1886 was a culmination of a concerted struggle. Chicago was the major industrial centre of the USA. Police attacked striking workers from the McCormack Harvester Co., killing six.

On May 4th at a demonstration in Haymarket Square to protest the police brutality a bomb exploded in the middle of a crowd of police killing eight of them. The police arrested eight anarchist trade unionists claiming they threw the bombs. To this day the subject is still one of controversy. The question remains whether the bomb was thrown by the workers at the police or whether one of the police's own agent provocateurs dropped it in their haste to retreat from charging workers.

In what was to become one of the most infamous show trials in America in the 19th century, but certainly not to be the last of such trials against radical workers, the State of Illinois tried the anarchist workingmen for fighting for their rights as much as being the actual bomb throwers. Whether the anarchist workers were guilty or innocent was irrelevant. They were agitators, fomenting revolution and stirring up the working class, and they had to be taught a lesson. Albert Parsons, August Spies, George Engle and Adolph Fischer were found guilty and executed by the State of Illinois.

In Paris in 1889 the International Working Men's Association (the First International) declared May 1st an international working class holiday in commemoration of the Haymarket Martyrs. The red flag became the symbol of the blood of working class martyrs in their battle for workers rights.
Posted by RH at 1:06 PM