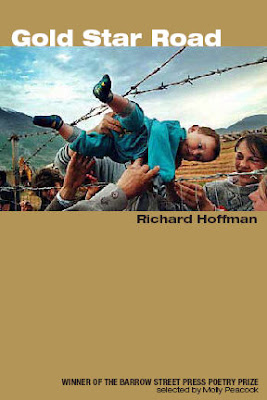 Here are two poems from Gold Star Road, followed by links to others from the book that appear elsewhere on the web, and jacket blurbs from poets Molly Peacock, Linda McCarriston, Afaa Michael Weaver, and D. Nurkse.

A trout on a river-bank
knows where the river is;

a fox in a trap
knows the time,

but a man or woman
only knows the story

No ant will enter
another’s hill,

no bee another’s hive,
and a rook, atop

a dead oak,
knows which side it’s on,

but a man or woman,
led by liars,

will discuss, calmly,
who should dig the pit

and if it is a better
lesson to slaughter

the neighbors’ babies
first or afterward.

A squirrel burrows deep
in a hollow trunk;

the bear returns
to her darkened cave,

but a man or woman,
gorged on blood,

and waking, says
peace is a dream.

A rabbit may cower,
but only so long;

the common sparrow
knows the seasons,

but a man or woman
only wants a song, a poem,

a religion to profess
that no one who has known

goodness even once
is ever wholly lost.

Because I was born into ongoing falsehood,
I have had to learn to think in metaphors,
to lash together what could be found on
each small island of that barren archipelago,

to learn what would float, to find what would
carry me. It is only when I am tired I pity the
various people I have been or, worse, deny them.
I have not met anyone who is entirely who

he thinks he is, nor people anywhere so strange
they did not, somehow, move me. When death comes
I have left instructions for my friends to put me
back in the thesaurus with my ancestors.

Hoffman's poems tap into moments when civilization dissolves, not superficially, but at its emotional roots. Simply reading this book becomes an engaged, passionate experience. Time and again through the poet's weary irony comes the bite of life. He makes the world seem, in the words of Wislawa Szymborska, whom he quotes: "just a room away." - Molly Peacock

Hoffman is the poet traveling our nightmare of now, our descent into a lack of love for one another, but along the way he finds etchings of hope on the walls amid all the signs of a falling away from a center that has forgotten how to hold. - Afaa Michael Weaver

Poetry should be beautiful and dangerous, unforgettable, transformational, meaningful across academic and social borders. This is. - Linda McCarriston

Hoffman is a rarity among American poets; his premise is dialogic, his canvas vast, his stance self-questioning. This new book is breakthrough work; poetry of hard-earned grounding, profound integrity, and scalding, visionary intensity. - D. Nurkse
Posted by RH at 11:49 AM

Your reviewers say it better than I ever could, but bravo. I'm so glad you posted the news, including that so appropo photo on the book jacket, and the links. "Pantoum" has been a most moving poem to me. - tls